This is about GK- International Affairs- Bank Job. By practicing it you will be successful in your mission. Let’s start.

2. Which organization will be replaced by WTO- GATT.

3. The head office of WHO is located- Geneva.

6. Sir Isaac Newton was a- scientist. 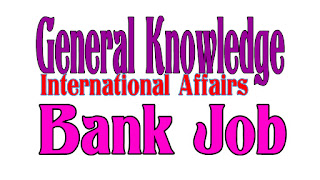 9. The name of canal/strait joining the Red Sea with the Mediterranean  Sea- Suez

11. Each year world Red Crescent and Red Cross day is celebrated on- 8th May.

12. For seeing objects at the surface of water from submarine under water, the instrument used is- periscope.

14. For galvanizing iron which metal is use- zinc

15. Study of life in outer space is called- Exobiology.

16. The first man made satellite Sputnic1 launched by former URSS in- 1957.

17. The headquarters of Organization of Petroleum Exporting Countries (OPEC) – Vienna.

18. The longest Rail-way line in the world- The Trans-Siberian in Russia.

21. Which is the largest muslim country in the world in term of population- Indonesia.

23. Which is the name of Boarder Security Force of Myanmar- BGP (Boarder Guard Police).

24. Who is the Secretary General of OIC- Iusuf Al Osaimin.

25. Which country is known as the sugar bowl of the world- Cuba.

26. The oldest tennis tournament in the world- Wimbledon.

30. Which country is the host of 2019 Cricket World Cup- England and Wales.

32. Which country is known as ‘Land of the Rising Sun’- Japan.

34. Who is popularly known as ‘Gandhi’ of Sri Lanka- A.T. Ariyaratne.

36. What is the name of currency of Myanmar- Kyat.

39. The new capital of the Indian state of Andhra Pradesh is – Araravati.

40. The capital city of Albania- Tirana.

41. The official language of the Canadian province of Quebec is- French.

42. The national flower of USA- Rose.

45. The ‘Father of Green Revolution’ is called- Norman Borlaug.

48. The name of Israel’s intelligence agency is- Mossad.

50. Missionaries of Charity was established by Mother Teressa in- 1950.

52. The World’s Diabetes Day is observed on- 14th December.